In the archive you'll find bands I played with,
collaborations & gigs not appearing on the main BANDS page.

NB. the "archive" is incomplete and gaps will be "updated" periodically. 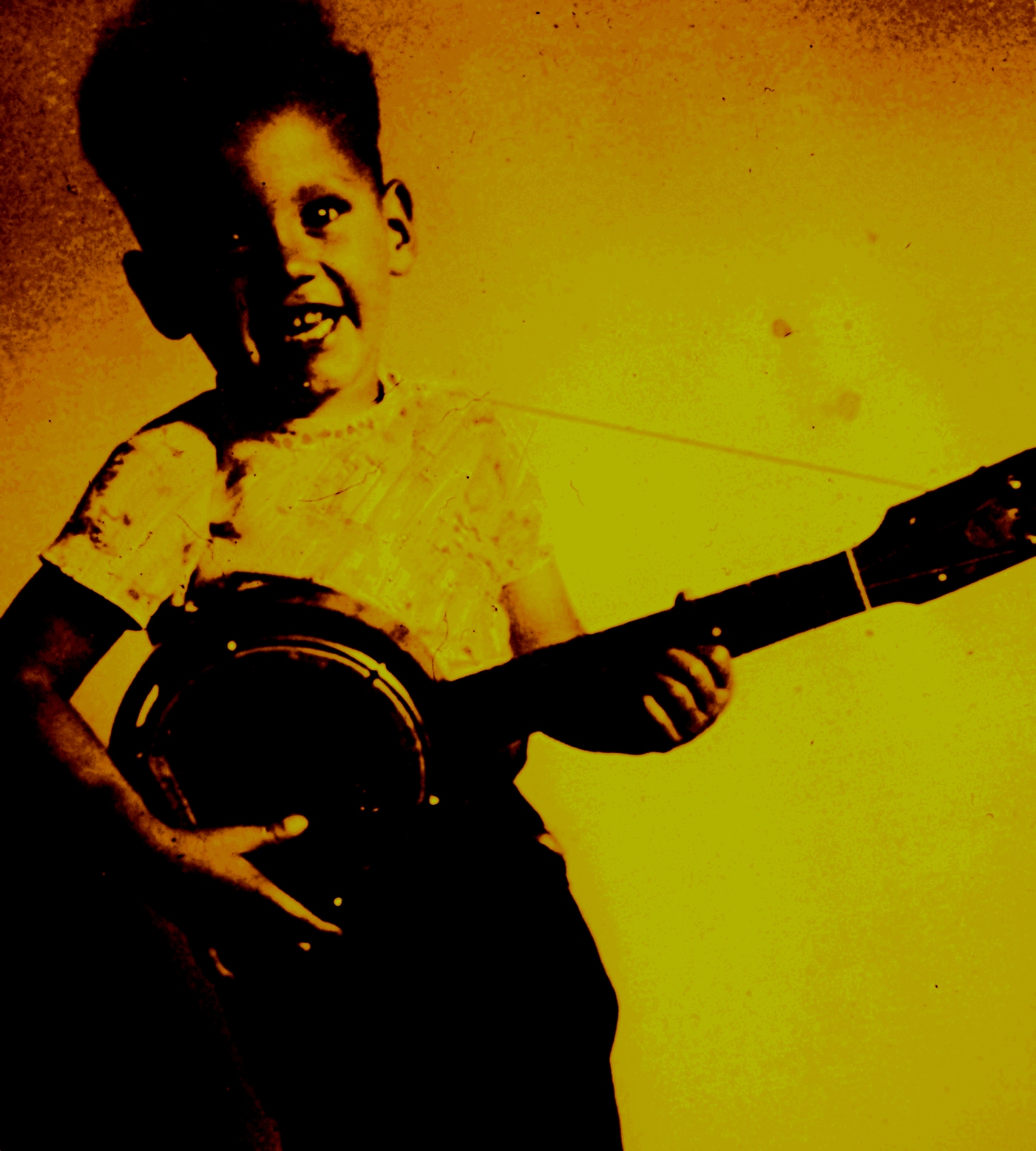 I was born and brought up in Kent, The Garden of England. The first song that my parents remembered me singing was “Tammy” from a Debbie Reynolds’ film “Tammy And The Bachelor”– which was a hit in 1957, so I must have been about 3. The photo of me with the ukulele banjo must have been taken a little later. I’ve no idea where it ended up. One of the first songs that made an impression on me at school was the hymn “When A Knight Won His Spurs”. My Uncle Ian also impressed me when he brought his guitar to our house and sang “Cigareets, Whusky And Wild, Wild Women”. He played guitar in a skiffle group and was a train driver. At bedtime in the mid-sixties I would tune in to Radio Luxembourg and later on to the pirate stations: Radio London, Radio Caroline. A lot of these stations were broadcasting in the Thames estuary just off the north Kent coast. From about the age of eight I’d been able to listen to records in my room. My Dad had some old 78s which I was allowed to play (among them some fabulous disks by Red Ingle & His Natural Seven and Danny Kaye). My Uncle George had also passed on some of his 78s, including Hound Dog/Don’t Be Cruel (Elvis) and “Blueberry Hill” (Fats Domino). I was still at primary school (10 years old) when the Beatles film “A Hard Day’s Night” appeared at the Ritz cinema, Tonbridge. My life changed that day. I fell in love with the idea of being a singer and a musician.

I got my first guitar when I was fifteen, it was a Christmas present from Nan Sumbling (my grandmother). That November we’d seen the Johnny Cash at San Quentin documentary on TV at home. I’d put in a formal request. It wasn’t a steel-string acoustic like Johnny’s. It was a Spanish guitar and I played my first chords and songs on its nylon strings. The Bert Weedon Play-In-Day method didn’t work for me – it was all scales and dots. But the John Pearse Hold-Down-A-Chord method that Grandad George brought home from the printworks were he and Dad worked, soon got me playing simple accompaniments and, almost immediately writing my first songs. There were a few guitarists at school and one, who was in my year, was Charlie Carter. We traded songs and disks, and listened to The Beatles, The Stones, Peter Green’s Fleetwood Mac, Jimi Hendrix, King Crimson, Led Zeppelin, Stackridge, Quintessence, Jeff Beck, The Groundhogs, Sandy Denny, The Lovin' Spoonful, CSN & Y, Buffalo Springfield, Steve Miller Band…

In the summer of 1972, Charlie and I caught a hovercraft from Ramsgate and hitchhiked to Paris, Antwerp and Amsterdam . We busked in the Paris metro (a limited set that included Norwegian Wood and Cigareets, Whusky And Wild, Wild Women) and hung out in the Vondel Park in Amsterdam (Concerts by Arthur Brown and Manfred Mann). We met up with school friends, watched the Bangla Desh movie recorded the previous year, strummed and chilled out. 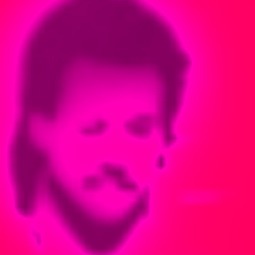 I can’t say I played at all or most of the folk clubs in Kent. But I played a good few, many of them in the Canterbury and Thanet area. It all began at Christ Church College , where I was a student. It was called floor singing. Basically you turned up and were put on a list, then called to sing songs. Some places were open to non-folk stuff – others were more conservative. This was my first opportunity to sing my own songs in public.

The Folk Club at C4 ( Christ Church College , Canterbury ) was run by pipe-smoking, genial Pete Gladman. For a while I was also Social Sec. for the Student’s Union and had the good fortune to meet Ian Dury, then a teacher at the local art school, and his band: Kilburn and the Highroads. I also met folk singer Derek Brimstone around this time and, thanks to him I got to meet guitarist Diz Disley and stand three feet away from the legendary violinist Stephane Grappelli.

The Chilham Minstrels were the house band at Chilham Castle, near Canterbury . While the punters tucked into their medieval venison feasts, they were serenaded by a troupe of mead-enhanced minstrels lurking in the gallery above. My stay with the Minstrels was a short and hazy one and coincided with Bing Lyle (flutes, recorders) and Henry Sparks (mandolin) who together went on to form the new wave band Longport Buzz. Bing is now the celebrated accordianist with The Sussex Pistols.

Around this time (1975) I also entered the Melody Maker Folk/Rock Contest and got as far as the London heats. My own songs at this time included: “Cheap Romance”, “Sentimental Fool”, “Saint Martin’s Hill”, “The Lady’s Not For Sale”, “The Right Thing”, “The Actor”, “Cardboard City”, and “Tired Lady”.

I also took an interest in the piano for the first time. Pete Pateman was my first, best and only piano teacher. We used to sneak off to the music rooms at the College and tinkle the ivories together.!

Other musicians that I met while at C4 were Pete Hayes (guitar), Chris Ufton (vocals, guitar), Laurence Arnold (drums) and the infamous Nidge (guitar). With Chris and Laurence we would later form Cheetah, the group which would later evolve into morris and the minors (see main Bands page).

Another musician I met around this time was Graham Flight, singer with the legendary Canterbury group "The Wilde Flowers" and later leading member of "The Polite Force" and "The Happy Accidents". Graham encouraged me to "audition" as a singer with a group that Dave Arbus (East Of Eden) was trying to form. This must have been around 1975. Unfortunately I blew the audition having prepared the wrong Spencer Davis tune.

Check out morris and the minors on the main BANDS page

Speaker's Corner was the teaching co-operative (school of foreign languages) a group us founded in 1983.

Concert recorded along with new songs: “State Of Affairs ”, “Spit It Out”.

Gigs at International House, Sabadell. Home recordings in Barcelona.
Covers included: “The Spider And The Fly” (Jagger/Richards), “Honey Don’t” (Carl Perkins).
My originals were: “Question Of Time”, “I’m Not Dancing/Turning on The Waterworks”, “Pretty Blonde Head”, “Michael Don’t Bellyache”, “Brother (Born Out Of Love)”, “Friend In Need”.
Paul’s were: “Put Your Money Where Your Mouth Is” “One More Victory”.

Mary was an aspiring blues and “torch song” singer who I met in Barcelona in the mid-eighties. She studied singing with Lottie Lewis, an American jazz/blues artist who still lives in the area. Together we played covers of some Julia Lee songs and other blues standards and my "Michael Don´t You Bellyache". My role, for the first time, was purely as a guitarist.

I met a lot of local rock and jazz musicians at jam sessions at this period. These were weekend sessions, usually on Saturday or Sunday afternoon. The main players are mentioned above. My apologies if I´ve missed your name off the list.

We played regular Sunday gigs at a bar in Sabadell whose name I forget now. It was light, poppy stuff, mainly.

At the beginning of the 90s there were a series of annual all-night concerts held at Can Maiol (Palau-Solità I Plegamans). The Lightning Brothers, named after a group of Aboriginal Australian rock painters, were there - briefly!

Originals included “ You’ve Got To Laugh”, “Peripheral Vision” , “Perfect Strangers”. Covers included: “Light My Fire” (Doors), “Is She Really Going Out With Him?” (Joe Jackson), “Sign Your Name Across My Heart” (Terence Trent Darby).

Blues-rock with Latin and jazz influences.

Above is the extended line-up that played at the 1992 Can Maiol Festival.
Original songs included: “Merry England”, “Pretty Blonde Head”, “Barcelona”, “Tightrope”, “Bleeding Heart”, “I Don’t Want To Lose You”, “Remember”, “Burn Inside Me (music by Ruben Pou), “Gospel” (words by Jimi Hendrix).

This is the line-up that played in the UK in August of 1992. The repertoire was as above, but with the addition of several morris and the minors originals: “Poor Little Misunderstood”, “Saturday Girl” and “Home Is Where The Heart Is”. The concert at “Jams” in Folkestone was recorded.

Check out LA RUTA on the main BANDS page

This was an interesting gig at Track’s, Santa Maria de Palautordera. Marc was just back from New York where he’d been playing with Paquito D’Rivera.

Rehearsals the winter of 93-94 in Espluges, BCN. Carles Costa dropping out before the gig at Savannah Club, Barcelona , April 1994. Set included “Sitting On The Dock Of The Bay” (Cropper/Redding), “I Feel Good” (James Brown), “White Honey” (Graham Parker), “I Heard It Through The Grapevine” (Norman Whitfield and Barrett Strong), “I Wish” (Stevie Wonder), “Sexual Healing” (Marvin Gaye), “Stuck On You” (Joe Cocker), “Gimme Some Lovin” (Steve Winwood, Spencer Davis, Muff Winwood), “Brown Sugar” (Jagger & Richards), “Got To Get You Back In My Life”(Lennon/McCartney).

The Playboys met up in the summer of 1997 and played one gig as a trio that summer. But what a gig! The Cambridge Festival would never be the same! The boys' set included a number of Bob Wills western swing tunes like "Right Or Wrong (I´ll Always Love You)", "I Can't Go On This Way" and the Big Joe Turner's "Flip, Flop And Fly".

In 1998 I recorded vocals on two tracks of a disk of Eric Clapton covers by Barcelona-based guitarist Quim Quiñonero (Badge - Quim Quiñonero - Discmedi Blau Records). The songs and personnel were as follows:

Mostly versions: “Please Send Me Somebody To Love” (Percy Mayfield), “From Four Until Late” (Robert Johnson), “Mama Let Me Lay It On You” (Mance Lipscomb), “Jesus Is Mine” (Cephas/Wiggins), “Delia (All My Friends Are Gone)” (Reverend Gary Davis), “I Am A Pilgrim” (Merle Travis), “The Wind Cries Mary” (Jimi Hendrix), “It Takes A Lot To Laugh It Takes A Train To Cry” (Bob Dylan)”, “Folsom Prison Blues” (Johnny Cash), “Wreck Of The Ol’ 97” (Vernon Dalhart), “Black Brown And White” (Big Bill Broonzy), “Keep Your Hands Off Her” (Big Bill Broonzy).

This is the acoustic duo we put together from time to time to play songs by Paul Simon and Art Garfunkel and the Fab Four. Covers include: "Bookends", "Mrs Robinson", "Homeward Bound", "The Boxer", "I Am A Rock", "Two Of Us", "Things We Said Today", and "Magnolia".

Gigs at the Griffin, Sabadell and some live recording and broadcasting from Radio Sabadell.