See the ARCHIVE page for more BANDS. Here you'll find stuff on The Minors and The Slim Kings.


Morris and The Minors / Fastbreeders (1978-1980)
The Minors was my first real band. Based in Kent (The Garden of England), we played in pubs and clubs around the county in the late 70s and early 80s. Some people called it pub rock and others power pop. To give you a rough idea, we played versions of songs by Ian Dury, Elvis Costello, The Cars, Joe Jackson, Eddie & The Hot Rods, Chuck Berry, Thin Lizzy and our own songs.

I'd been playing since 1976 with Pete and Laurence in a band doing mostly cover versions called Cheetah. Some of us thought the name might have had something to do with Tarzan's simian sidekick. I think I had four or five of my own songs in the set when the other singer/guitarist/songwriter (Chris Ufton) and bass guitarist (Melvyn Armot) left the band in 1977. 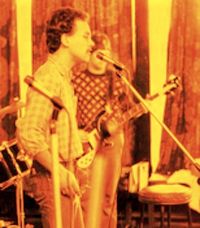 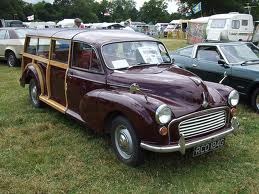 L-R: Cheetah, Peter Gazey 'spaced out', Minor Stretch Traveller.
Most of the band's original songs were my own: "(Home Is) Where The Heart Is" and "Nine To Five" were from the Cheetah period. Both were recorded at a studio in Whistable, Kent in 1977 with the first line-up (Paul joined up some six months later, after we ditched the chimp). Other original songs included: “No Emotion”, "Saturday Girl"and "Wallflower" (all recorded at Oakwood studios in 1979). There are live recordings of "Maintenance Man", "(Poor Little) Misunderstood", "The Right Thing", "Night Shift", "Forget Her" and "Anyone Else But You". But the most memorable original song we ever did was written and sung by Paul Nesbitt-Larking:

Reds Under Your Bed

Next time you go to wee in your potty
You'd better watch it, 'cause we're very dotty
You're gonna struggle with the Commie foe
We're very radical and we've got your po

We’re gonna stuff your mind with propaganda
We’re gonna make you step goosey, goosey gander
We’re gonna chop you’re kids into pieces
Put the back together in a left-wing thesis
We are the reds under your bed…

In the early days I drove to gigs in my ex-Post Office Morris Minor. Later, as we began to play bigger gigs more often, Bob Lopez joined the band as sound engineer, publicist and general factotum. We acquired cabs and bass bins and needed a bigger van. It was a green Ford Transit with a cartridge music system and belonged to Pete Kelly, who became our driver and roadie.
In '79 we cut a second version of "NO EMOTION" for the First Offenders compilation album of Canterbury bands on the Criminal Records label. The song was recorded live using the Manor Mobile Studio at The Marlowe Theatre, Canterbury. At this point we changed our name to avoid confusion with another band - also called Morris & The Minors - who were from London and who changed their name shortly afterwards to 'Madness'. We appeared on the 1980 release as 'Fastbreeders'. 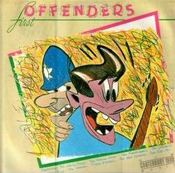 Spring of 1980, the band played at The MARQUEE CLUB (then, as now, at 1 Leicester Square, London) in the regional finals of “Melody Maker Battle of The Bands”. We were told we sounded like a cross between The Attractions and Thin Lizzy. Our image was all wrong; we looked like 2 Deaf Schoolboys + 2 Dire Straits + 2 Pink Fairies. At least the guy from MM got a laugh out of it. Check out the photos and see if you can work out who is who.

The band played its last gig in July of 1980, and shortly after that I left to live and work in Spain. I’ve kept in touch with Pete Gazey and Bill Reading. We usually meet up at least once every couple of years. Both are still inspiring guitarists. Next time we meet up I hope to play some gypsy jazz with them. More recently I also made contact with Paul NL, who's living and working in Canada.

In the summer of 2004, five of the original six members, all except Laurence, Bob and Pete Kelly (all of whom we tried to trace) did manage to meet up at Bill's in Chartham, Kent.

Pete and Paul also came over Barcelona in July 2006 and recorded their contributions to "Tears (Come Rolling Down)" on "TESTING TIMES"  and which you can hear on the site-wide player (also featuring Colum Pettit on violin and Juan Carlos García on accordion). 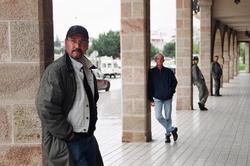 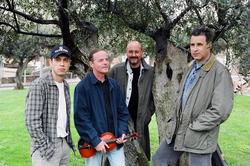 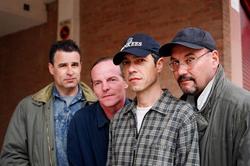